The great unveiling – should I wear a veil? 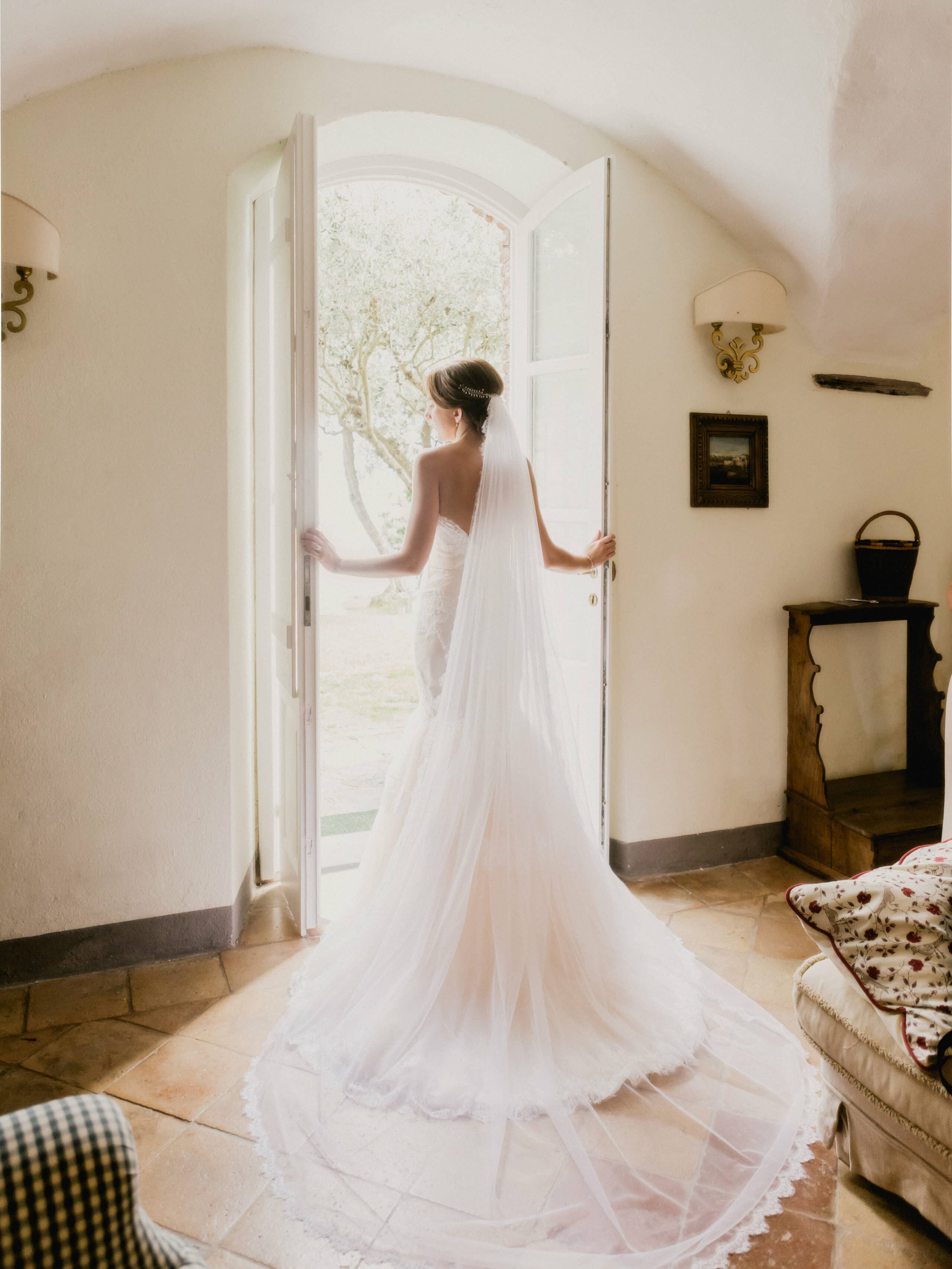 14 Nov The great unveiling – should I wear a veil?

One of the top questions we get asked, usually right before the bride walks down the aisle, is: should I wear a veil?

It’s a modern day anomaly from the old world – the bridal veil – more often than not it is bought and then pops up on wedding day prepared to go, but there’s always a lingering question on whether it will be confirmed for the main event at the last minute or not. We feel for the veil as often its staring role is left in the hands of the hairdressers: will it go with the desired hairstyle or be up staged by a glittery hairpiece or fresh flower? Or will mother of the bride or the bride herself deem it uncomplimentary to the final overall look? Or will the bride’s modern accustomization to ease-of-movement and easy-to-wear banish the veil to the never-to-wear realms of the corset, garter belt and the crinoline (the highly flammable petticoat that killed thousands of women in the Victorian era)?

And if the veil does make the cut, the second question is, how do I wear it? And then when do I take it off? So before we analyse what our brides have been doing today, in our Cinque Terre Wedding Fun Facts*, let’s jump back in time to find out what our brides of yesteryear did.

So super interesting fact is that the wedding veil is the oldest member of the bridal ensemble, going back to ancient tribes who would wrap the bride head to toe to represent the untouched maiden and protect her from prying eyes and evil spirits. We also know, over 1,000 years ago, in the Middle East, bridal parties traveled beneath a protective canopy. The modern veil is thought to be a miniature version of this. Symbolic of purity, privacy and concealment, it has always been reserved for brides marrying for the first time. 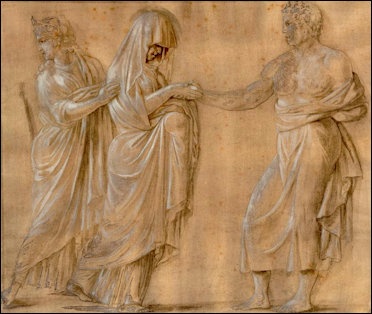 Photo: Reproduction of a terracotta slab from Campania during the Roman period, of the Marriage of Peleus and Thetis. Source: Mikimedia Commons

Historically the veil has also been used for practical purposes. In the days of arranged marriages, which were very common around the world until the 1700s, the veil was used to hide the bride’s face from the groom and only to be raised after the vows had been said. With many couples not having seen each other before the wedding day, this was a way of stopping the groom from reneging on the deal, in the case he found his new wife not pleasing to the eye.

And in the past, different cultures used the veil in different ways. The ancient Greeks wore scarlet coloured veils, representing Hymen, the god of marriage and after the ceremony offered up their veils to Hera, the goddess of women, marriage, family, and childbirth. While the ancient Romans wore vivid saffron coloured veils over braided hairstyles or garlands of wildflowers.

Perhaps due to the cost of creating the sheer veil, it lapsed in popularity from the early anglo-saxon brides of the 400s until it disappeared completely by the 1700s. But two important events brought the veil back into fashion in the 1800s, firstly advances in technology brought the mass production of tulle to the market and secondly Queen Victoria decided to be the first modern monarch to marry in a veil. Apparently not wanting to hide her face from her subjects, instead of wearing the veil over her face she wore it cascading over her shoulders and down her back. And if ever there was a love story to influence the ages it was the love story of Victoria and Albert so it’s not surprising that her legacy still carries on today. 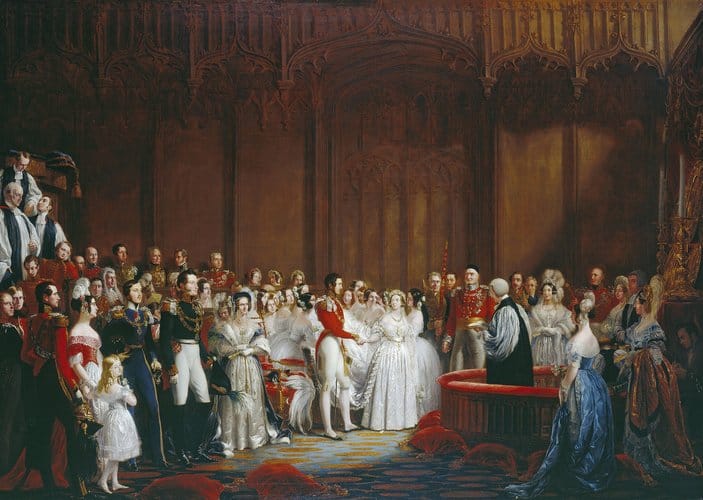 Painting of Victoria and Albert Wedding by Sir George Hayter.

In the 1930s Vogue magazine declared the practice of wearing the veil over the face “outmoded” but for religious ceremonies and romantic-minded brides we still see some brides celebrate the lifting of the veil as one of the high points of the ceremony. Think Duchess Kate and Meghan – “outmoded” we think not! 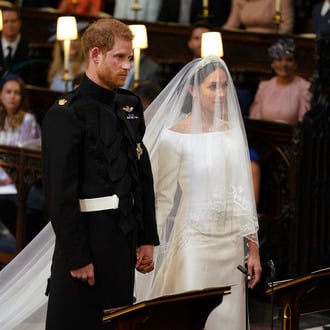 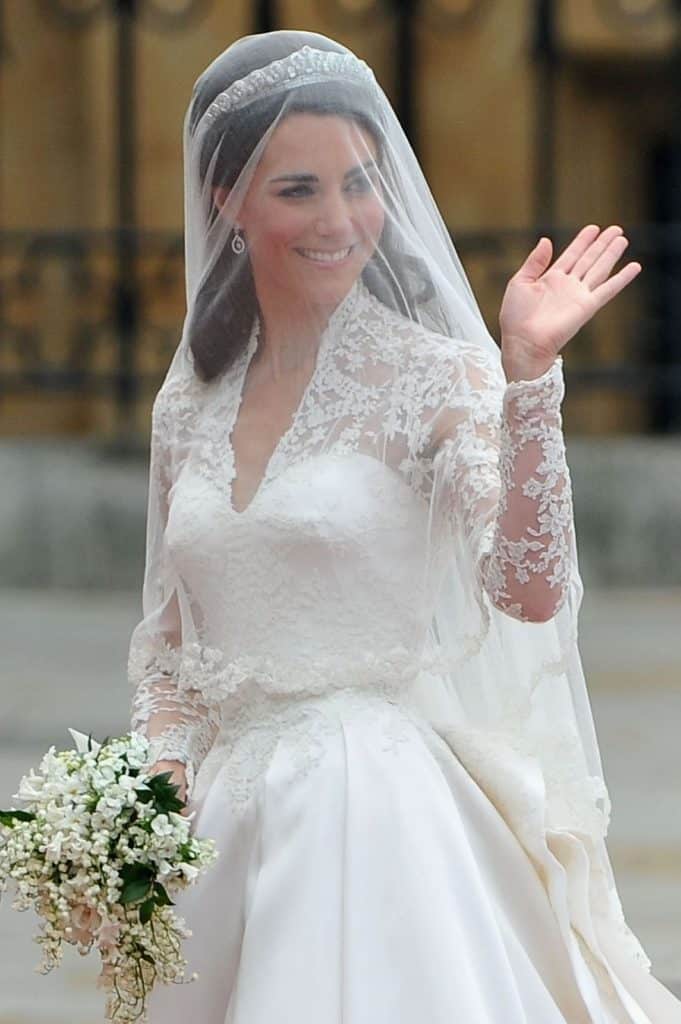 So what are brides today doing? To veil or not to veil? Well, our Cinque Terre Wedding Fun Facts show that around half, 51 per cent, of brides are still wearing veils for the ceremony. 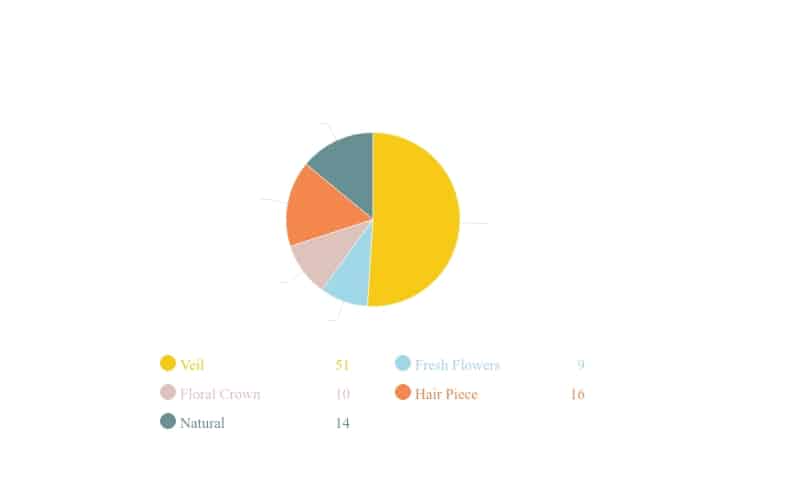 And for those who are wearing the veil, the majority are wearing it Queen Victoria style, face exposed, cascading down back. In fact, just 14 per cent are opting for the long-held tradition of wearing the veil over the face when walking down the aisle, Kate and Meghan style. Notably, 83 per cent of those covering the face are religious weddings. 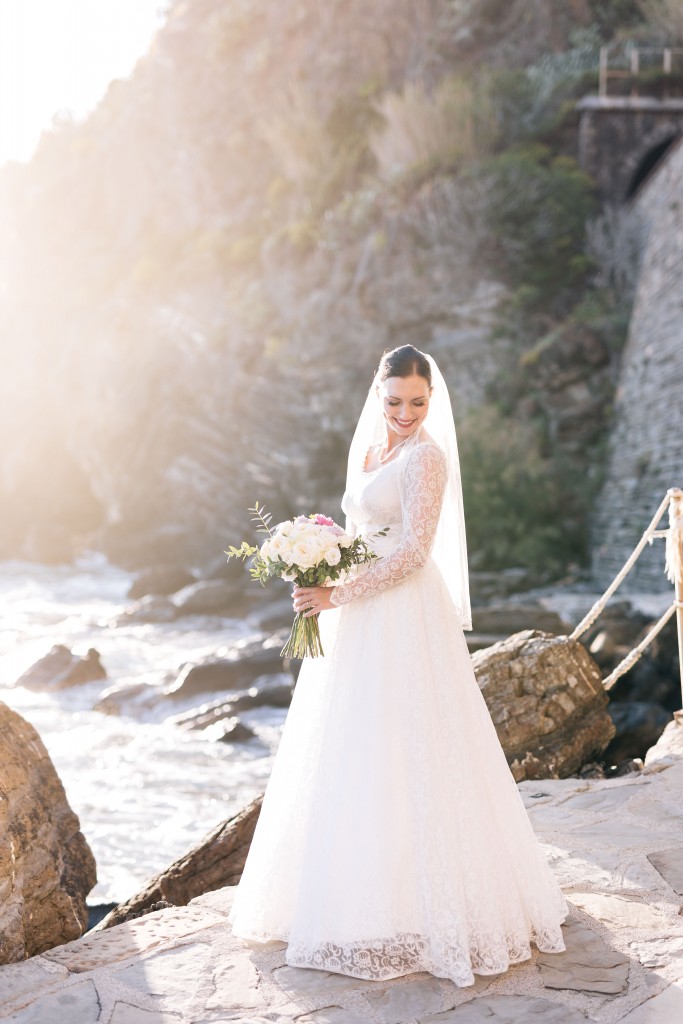 And when it’s time to partay? The majority, 70 per cent of brides, remove the veil for the reception part of the wedding.

And for those brides going without the veils, what seems to be the popular alternative? Well, around 16 per cent of our brides are wearing hair pieces such as decorative hair combs, vines or tiaras. 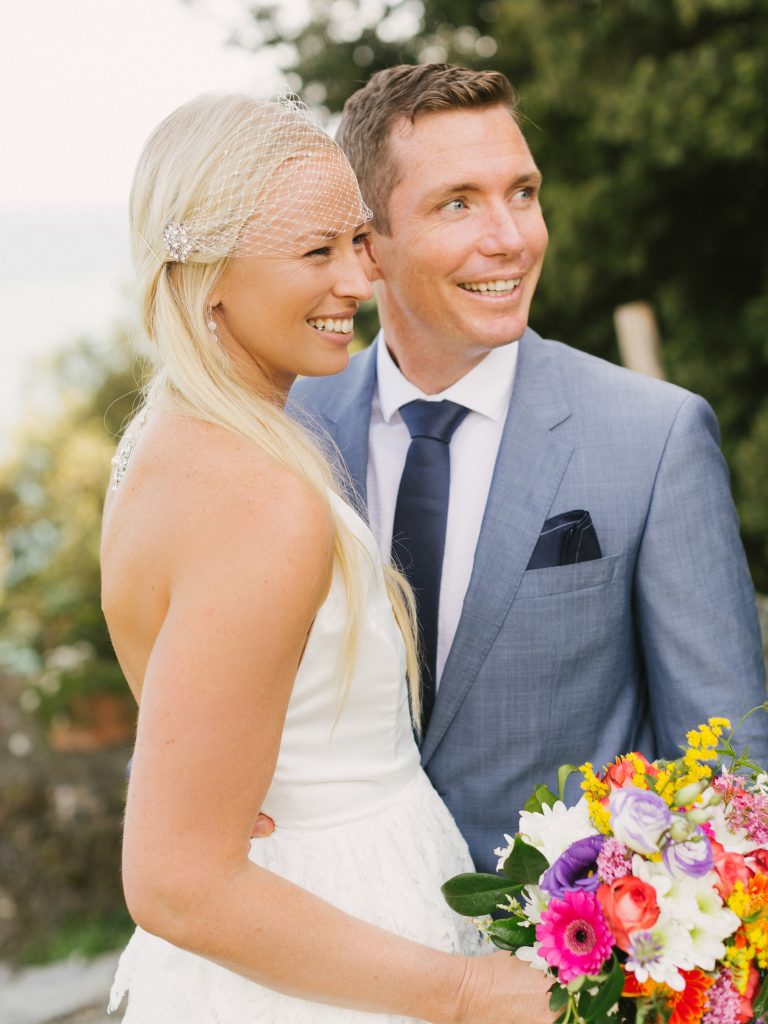 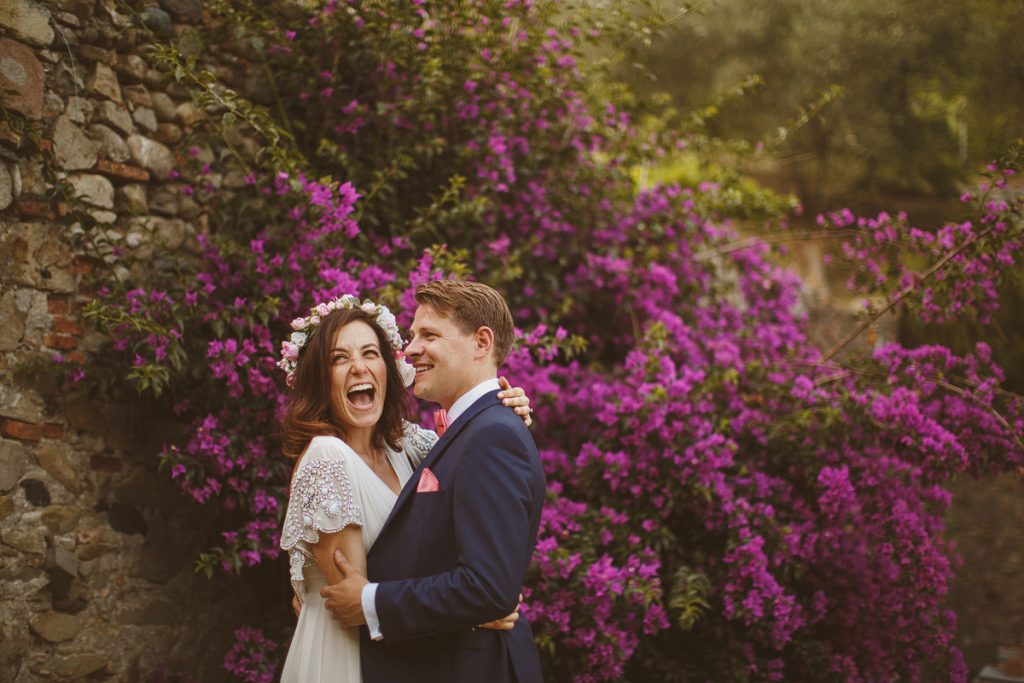 And if in doubt, a small number, around 14 per cent of brides, are opting to go naturale with no veil or hair embellishment, at all.

So by the looks of things we are still, in the main, carrying on the traditions of our ancient tribal ancestors, wearing veils for the ceremony and then offering them up to the goddess Hera, before partying on at the reception. Literally, following in the footsteps of women who have walked down the aisle before us as brides for thousands of years. Kind of makes every step all the more special, right? We think so. 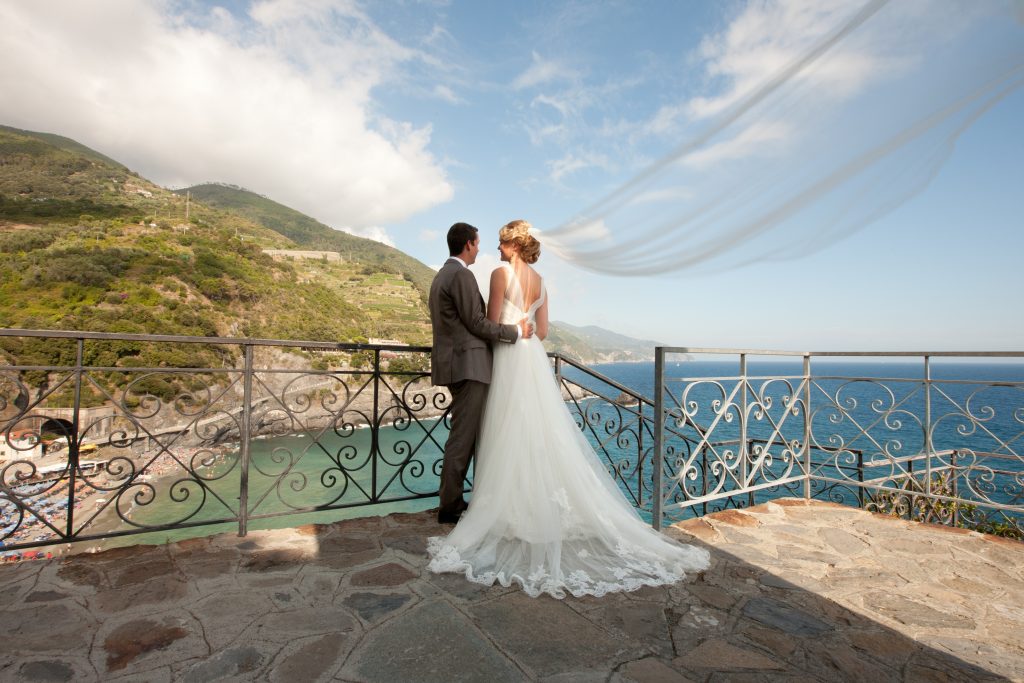 In the purpose of recognising and respecting cultural diversity, we acknowledge that this article is Anglo-Saxon focused, written from the insight of destination weddings in Italy, and does not explore veil wearing traditions at weddings that could be practised in many other parts of the world by many other different cultural and religious backgrounds.